GTM Research warns that there is a clear difference between spot market trends and the market at large, as a majority of modules are bought and sold through bilateral contracts.

“The fall in spot price in the first half of 2014 is not like previous years, where falling prices reflected severe upstream overcapacity. In fact, module ASPs for top-tier suppliers increased in Q1 despite declining spot prices, as high ASP regions (U.S., U.K. and Japan) provided steady demand. The downward trend in prices is likely reflective of seasonally weak prices in low ASP regions (China), large volumes of lower-priced, off-spec modules (i.e., modules with lower wattages than the industry standards), and lower-tier suppliers in regions such as Malaysia and Vietnam offering aggressive prices to gain market traction,” said GTM Solar Analyst Jade Jones. 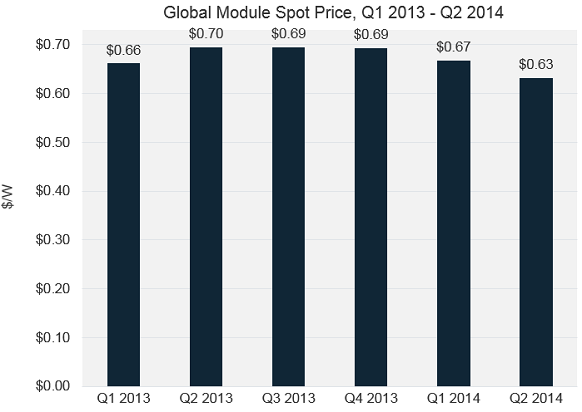 The globally blended price for Chinese modules in the same period was 67 cents per watt. In the near term, GTM forecasts global prices to rise 2 cents per watt by the fourth quarter of the year, reaching 69 cents.

As covered earlier this year, module prices vary significantly by region. On the high end sits Japan at 73 cents, while China will slightly rise to an average of 60 cents this past quarter and hit 63 cents in the fourth quarter of the year. Current prices for Chinese-produced modules in the U.S. ranged from 69 cents to 73 cents. However, tariffs imposed by the Department of Commerce would cause an increase of 14 percent on average, and prices could range from 74 cents to 85 cents per watt by the end of 2014.

How will manufacturers reduce costs or mitigate cost increases?

With silver and polysilicon prices on the rise, reducing costs to grow margins is proving to be key in 2014, according to July’s PV Pulse. Strategies already being employed by major players include qualifying new material suppliers, optimizing the bill of materials by end-market, reducing silver utilization and increasing automation.

“Going forward, it is unrealistic in the extreme to expect consumables pricing to decline at anything close to recent historical levels, meaning that manufacturers must either invest in new technology solutions or find creative solutions to continue driving module costs down. A popular strategy in recent times is the adoption of increased manufacturing automation in China due to steeply rising labor rates, particularly in the areas of cell inspection, testing, stringing and tabbing, where using machines in place of human beings not only saves labor costs but can also drive improved manufacturing yields and more consistent product quality,” noted Shyam Mehta, GTM Research’s Lead Upstream Solar Analyst.

The chart below shows how Chinese module manufacturers were able to halve the cost of modules in the space of two years. 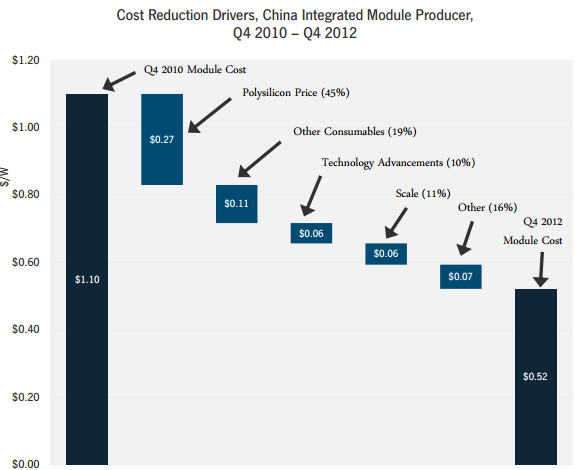 Tracking specific manufacturers, GTM Research notes that Jinko Solar had the lowest all-in module manufacturing cost (47 cents per watt), and Hanwha SolarOne had the highest at 59 cents per watt.